Super excited to share with you today and excerpt from this book that I cannot wait to dive into. Book publishes February 9, 2021🍷 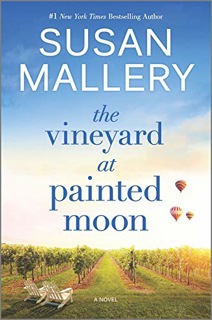 Step into the vineyard with Susan Mallery’s most irresistible novel yet, as one woman searches for the perfect blend of love, family and wine.

Mackenzie Dienes seems to have it all—a beautiful home, close friends and a successful career as an elite winemaker with the family winery. There’s just one problem—it’s not herfamily, it’s her husband’s. In fact, everything in her life is tied to him—his mother is the closest thing to a mom that she’s ever had, their home is on the family compound, his sister is her best friend. So when she and her husband admit their marriage is over, her pain goes beyond heartbreak. She’s on the brink of losing everything. Her job, her home, her friends and, worst of all, her family.

Staying is an option. She can continue to work at the winery, be friends with her mother-in-law, hug her nieces and nephews—but as an employee, nothing more. Or she can surrender every piece of her heart in order to build a legacy of her own. If she can dare to let go of the life she thought she wanted, she might discover something even more beautiful waiting for her beneath a painted moon.

Mackenzie carefully studied the wine in the glass before taking another sip. This time she let the liquid sit on her tongue a bit longer before swirling it in her mouth and then spitting it into the coffee mug she’d brought with her.

Barrel tasting was essential so she could keep track of the progress of the wine, but getting drunk while doing so was a rookie mistake. She’d learned early that spitting came with the job. She picked up her clipboard and made a few notes. Later she would transfer the notes to a computer file. Old-school, for sure, but it was how she preferred to work.

This corner of the barrel room held her personal wines— blends she’d created because she’d had an idea and had wanted to see how it played out. The first three times that had happened, Barbara had flat-out refused and then had told Mackenzie to stop asking. Frustrated, Mackenzie had told Barbara that if the wines didn’t do well, she would cover the losses with her salary. But if they sold the way Mackenzie expected, she would get a cut of the profits for as long as the wines were made.

Barbara had agreed, drawing up a contract they’d both signed. Two years later the first of the Highland wines had been released. Highland Thistle—named in tribute to Mackenzie’s Scottish ancestry—had sold out in two weeks. She’d used a more French style of blending the cab and merlot grapes, giving Thistle a softer finish that was appealing to a younger crowd.

The following year Highland Heather, a nearly botanical chardonnay, had sold out before the release. Last year, Highland Myrtle, a Syrah, had done the same. At that point, Barbara had stopped telling Mackenzie no on pretty much anything wine related. Still, the three wines provided a steady flow of money every quarter. The proceeds were currently just sitting in an investment account, but someday she would do something with them.

She reviewed her notes, then tucked the clipboard under her arm and headed for the offices on the second floor.

Bel Après had grown significantly over the past sixteen years. They’d always had enough capacity to produce more wine, but previous winemakers had sold off hundreds of tons of grapes rather than risk creating a new wine that failed. When Mackenzie had come on board, she and Barbara had come up with a strategic plan using the best of what Bel Après produced.

As she took the stairs to the second floor, she glanced at the awards lining the wall. Bel Après had started winning awards with Mackenzie’s very first vintage, and Barbara had been giddy with the success. She’d wanted to enter every competition, but Mackenzie had insisted they be more selective. Better to place in a few prestigious competitions and get noticed rather than win awards no one had heard of.

Bel Après had been written up in journals and magazines, driving sales. Every year they’d expanded production. Ten years ago, they’d tripled the size of the barrel room.

She reached the top of the stairs and paused to look at the pictures mounted there. They showed Bel Après as it had been a generation ago, when Barbara had been a young bride. From there, all the way down the long hallway, photographs marked the growth of the winery and the family.

She smiled at a photograph of Rhys with his three sisters. He looked to be about ten or eleven with the girls ranging from nine to maybe five. The girls were all smiling and mugging for the camera, but Rhys looked serious, as if he already knew how much responsibility he had waiting for him.

He’d grown into a good man, she thought. He worked hard, was a fair employer and came home every night. Rhys was her rock—his steadiness freed her to send all her energy into the wines.

Mackenzie’s parents had died when she’d been young, and her grandfather had raised her. He’d been a winemaker up in the Spokane area of the state, and she’d grown up understanding what it was to wrestle magic from the soil.

He’d gotten sick when she was fifteen—a cancer that could be slowed but not cured. Sheer will had kept him alive until she’d graduated from high school. He’d died that summer. Mackenzie still remembered the first day she’d moved into the residence hall, meeting her new roommate. Stephanie had been friendly and upbeat and exactly what Mackenzie had needed.

That first Christmas, Stephanie had brought her home. Mackenzie had been overwhelmed by Bel Après, dazzled by Barbara and swept away by Rhys.

He’d been so steady, she thought, smiling at the memory. Kind and strong, but with a sly sense of humor that made her laugh. Her second night there he’d knocked on her door at two in the morning, telling her to get dressed. He’d taken her outside, where unexpected snow fell from the sky. There, in the cold, dusted by new snow, he’d kissed her. It had been a perfect moment. She might not have fallen in love with him then, but she’d certainly cracked open her heart to the possibility.

She was still smiling at the thought when she walked down the hall, through the open door and into Barbara’s large office. The corner space had huge windows that overlooked the property. The other two walls were covered with maps of the various vineyards owned by the family.

Have a lovely day! Cheers Berit🥂