This book! What a crazy ride!  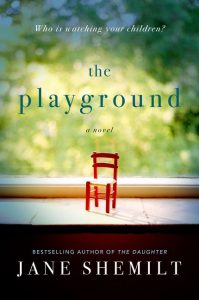 What a wild ride, this is a playground you want to avoid taking your children to! You know how you feel when you get off one of those playground merry go rounds? A little shook, a little queasy, a little unstable, A little flustered, that’s how I felt after reading this book. Three couples Meat and form a fast friendship. Their children all get along so well and this leads to barbecues, dinners, and even vacations together. All three couples are very different, but they are all very damaged and have some major secrets. What follows is a story full of deceit and tragedy. I would classify this as a dark domestic drama, despicable characters doing questionable things. I found myself shaking my head at these characters several times, I could not believe how involved they were in their own lives and how oblivious they were to what was going on with these kids. There are several tragedies in this story and I am still a little confused as to the reaction of some of the characters. This is one of those books where you don’t necessarily like any of the characters, but the story is so compelling you just have to find out what the heck is going on.

The story jumps between multiple perspectives and I have to admit I found this a little confusing in the beginning. There are a lot of characters and I couldn’t exactly figure out whose kid belonged to who for the first little bit, but once I did it became a little more clear. This book really kind of made me think about people’s priorities and made me put myself in these character’s shoes. Some actions are a little more forgivable than others, I’m still a little angry with some of these characters. A twisty story with a disturbing ending that still has me reeling.

🎧🎧🎧 This Book was narrated by Elizabeth Knowelden Who I thought did a wonderful job. There really is nothing better than having a book set in England read to you in an English accent!

Big Little Lies meets Lord of The Flies in this electrifyingly twisty follow-up to Jane Shemilt’s breakout debut The Daughter.

Over the course of a long, hot summer in London, the lives of three very different married couples collide when their children join the same tutoring circle, resulting in illicit relationships, shocking violence, and unimaginable fallout.

There’s Eve, a bougie earth mother with a well-stocked trust fund; she has three little ones, a blue-collar husband and is obsessed with her Instagrammable recipes and lifestyle. And Melissa, a successful interior designer whose casually cruel banker husband is careful not to leave visible bruises; she curates her perfectly thin body so closely she misses everything their teenage daughter is hiding. Then there’s Grace, a young Zimbabwean immigrant, who lives in high-rise housing project with her two children and their English father Martin, an award-winning but chronically broke novelist; she does far more for her family than she should have to.

As the weeks go by, the couples become very close; there are barbecues, garden parties, a holiday at a country villa in Greece. Resentments flare. An affair begins. Unnoticed, the children run wild. The couples are busily watching each other, so distracted and self-absorbed that they forget to watch their children. No one sees the five children at their secret games or realize how much their family dynamics are changing until tragedy strikes.

The story twists and then twists again while the three families desperately search for answers. It’s only as they begin to unravel the truth of what happened over the summer that they realize evil has crept quietly into their world.

But has this knowledge come too late?

While working full time as a physician, Jane Shemilt received an M.A. in creative writing. She was shortlisted for the Janklow and Nesbit award and the Lucy Cavendish Fiction Prize for The Daughter, her first novel. She and her husband, a professor of neurosurgery, have five children and live in Bristol, England.