If you love books and music as much as I do, you will love this book! A compelling dystopian/speculative fiction story that will definitely give you some food for thought.🎸 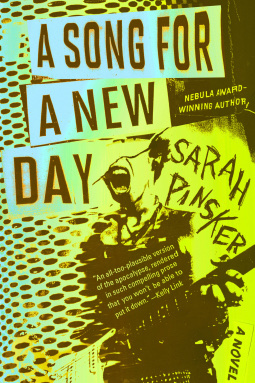 Sarah Pinsker has written a captivating dystopian/speculative fiction story that prominently features music. While this is not my usual genre it blends two of my favorite things music and books, and I loved it! Pinsker’s Love and appreciation for music especially live music comes across loud and clear in this story. Luce Cannon(Got to love that name) is a musician on the way to the top when the government calls for a halt to all live concerts. Not only concerts but most large social gatherings have been banned, do to continuous terrorist attacks. Rosemary spends her days working from home in customer service for a Walmart/Amazon hybrid. She is given an amazing opportunity to attend an online concert. This leads to a job offer to travel and search out bands who are willing to perform these online concerts. Luce and Rosemary’s haves cross one day at a underground banned concert. Luce and Rosemary are on opposite sides of the issue, will Rosemarys actions cause Luce to go further underground? So what will happen when the two meet up again? Will this be the “day the music died”?

Luce was A dynamic character with a tremendous passion for music and performing live. Rosemary was a quieter character but I found her to be a little more sympathetic I could really understand her inner conflict. The story was much more character driven than plot driven. I think dystopian/speculative fiction fans who are desiring a lot of world building might be a little disappointed, I myself wish the lead up to why the world was this way was addressed more in the book. But I don’t think this impacted my overall enjoyment of this riveting story. This really was a love letter to music and a warning letter to the Reader. While the idea of attending a concert from the comfort of your home Mike sound fabulous, we really don’t ever want to lose the human connection.

Publishers Weekly’s Most Anticipated Books of Fall 2019
In this captivating science fiction novel from an award-winning author, public gatherings are illegal making concerts impossible, except for those willing to break the law for the love of music, and for one chance at human connection.
In the Before, when the government didn’t prohibit large public gatherings, Luce Cannon was on top of the world. One of her songs had just taken off and she was on her way to becoming a star. Now, in the After, terror attacks and deadly viruses have led the government to ban concerts, and Luce’s connection to the world – her music, her purpose – is closed off forever. She does what she has to do: She performs in illegal concerts to a small but passionate community, always evading the law.
Rosemary Laws barely remembers the Before times. She spends her days in Hoodspace, helping customers order all of their goods online for drone delivery – no physical contact with humans needed. By lucky chance, she finds a new job and a new calling: discover amazing musicians and bring their concerts to everyone via virtual reality. The only catch is that she’ll have to do something she’s never done before and go out in public. Find the illegal concerts and bring musicians into the limelight they deserve. But when she sees how the world could actually be, that won’t be enough.