I am delighted, and very thankful to be part of the audio book tour for this wonderfully twisty psychological thriller, that will keep you on your toes throughout.

Anna has terrible insomnia, she hasn’t really been able to sleep properly since the accident, the guilt and the memories are eating her up from the inside.

She decides the best thing for her to do is just get away, so she goes as far away from her problems as she possibly can, and accepts a job on a remote Scottish island called Rum.

Getting ready for the busy period, 7 guests are checked into the Bay View Hotel.

Each one of them has a secret, but one has a deadlier secret that Anna doesn’t know about.

Someone’s going to sleep and never waking up…

I love a ‘Who-Done-It’ story, and this one was just wonderful, it wasn’t too fast paced, but it gradually sucked you into the story, until the inevitable WTF…..and I didn’t see it coming!

Prepare to turn into a detective while you try and work this one out!

Narration by Clare Corbett was excellent, I loved her tone and her very calming voice, but when the sh*t started to hit the fan, I found myself holding my breath many times.
I will certainly be looking out for other books she has narrated.

**Many thanks to Lauren at Avon Books, Harper Collins UK, and the Author for my copy of this audiobook**

All Anna wants is to be able to sleep. But crushing insomnia, terrifying night terrors and memories of that terrible night are making it impossible. If only she didn’t feel so guilty…

To escape her past, Anna takes a job at a hotel on the remote Scottish island of Rum, but when seven guests join her, what started as a retreat from the world turns into a deadly nightmare.

Each of the guests have a secret but one of them is lying – about who they are and why they’re on the island. There’s a murderer staying in the Bay View hotel. And they’ve set their sights on Anna.

Someone’s going to sleep and never wake up…

Super excited to share with you today my review for this amazing book that I loved from first page to last! Thanks to Trish for my invitation to this tour!🛳 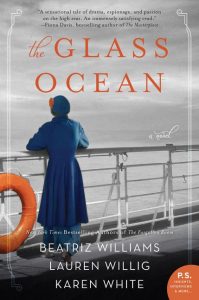 Beatrice Williams, Karen White, and Lauren Willig’s collaboration was flawless, beautiful, and riveting. These three authors have seamlessly woven together the lives of three strong, smart, and brave women. Caroline and Tess are two women from very different circumstances who find themselves onboard the Lusitania in May of 1915. Where they find themselves tangled up in elicit love, scandal, and beTrayal. Caroline was sophisticated and charming while Tess was feisty and tenacious, but these two ladies will find themselves forever bonded together I tragedy and love. Sarah is a present day struggling author trying to find the perfect storyline for her next book when she comes across her great grandfather’s chest. The information inside the chest contains  some information about the Lusitania that could alter the perception of history. The story was exquisitely told, flowing together perfectly as the narrative bounced between these three women. I was never confused and I think this was helped by the fact that I listen to this on audio. The book had three amazing narrators who gave the perfect unique voice to each of these characters. A remarkable story equal parts romantic and mysterious. Atmospheric and evocative this book will transport you to the opulence of the Lusitania and then to the horror of tragedy. The present day story was equally as absorbing. I loved watching Sarah piece all the clues together.

This book really made me quite curious about the Lusitania and why it hasn’t been romanticize as much as the titanic, almost the same amount of lies were lost in both tragedies. It also made me wonder why in the world would the US allow a passenger ship to sail across the ocean in the middle of a war? Especially because according to history Germany said they would sink the ship, and they were true to their word. Sounds like a terrible vacation, if Caroline and her husband Gilbert had gone to the Grand Canyon none of this would’ve happened. But then I guess we wouldn’t of had this exceptional story!

About The Glass Ocean

From the New York Times bestselling authors of The Forgotten Room comes a captivating historical mystery, infused with romance, that links the lives of three women across a century—two deep in the past, one in the present—to the doomed passenger liner, RMS Lusitania.

May 2013
Her finances are in dire straits and bestselling author Sarah Blake is struggling to find a big idea for her next book. Desperate, she breaks the one promise she made to her Alzheimer’s-stricken mother and opens an old chest that belonged to her great-grandfather, who died when the RMS Lusitania was sunk by a German U-Boat in 1915. What she discovers there could change history. Sarah embarks on an ambitious journey to England to enlist the help of John Langford, a recently disgraced Member of Parliament whose family archives might contain the only key to the long-ago catastrophe. . . .

April 1915
Southern belle Caroline Telfair Hochstetter’s marriage is in crisis. Her formerly attentive industrialist husband, Gilbert, has become remote, pre-occupied with business . . . and something else that she can’t quite put a finger on. She’s hoping a trip to London in Lusitania’s lavish first-class accommodations will help them reconnect—but she can’t ignore the spark she feels for her old friend, Robert Langford, who turns out to be on the same voyage. Feeling restless and longing for a different existence, Caroline is determined to stop being a bystander, and take charge of her own life. . . .

Tessa Fairweather is traveling second-class on the Lusitania, returning home to Devon. Or at least, that’s her story. Tessa has never left the United States and her English accent is a hasty fake. She’s really Tennessee Schaff, the daughter of a roving con man, and she can steal and forge just about anything. But she’s had enough. Her partner has promised that if they can pull off this one last heist aboard the Lusitania, they’ll finally leave the game behind. Tess desperately wants to believe that, but Tess has the uneasy feeling there’s something about this job that isn’t as it seems. . . .

As the Lusitania steams toward its fate, three women work against time to unravel a plot that will change the course of their own lives . . . and history itself.

Lauren Willig is the New York Times and USA Today bestselling author of several novels. She lives in New York City with her family.

Karen White is a New York Times and USA Today bestselling author and currently writes Southern women’s fiction. She lives in Georgia with her husband and two Havanese dogs.