Hello again, I’m so pleased to bring you this review for a fantastic series that had me flipping those pages and staying up late to finish!

Why did I pick it up? – HELLO …Tarryn!!!!! As you all probably already know by now, I am a sucker for a Tarryn Fisher book, she writes the most messed up characters, and they all have depth to them.

In this book Ms Fisher has collaborated with Willow Aster and created a world where the Women are in charge, in fact Men are on the verge of extinction!

Think of this book as a little like a reverse take on the Handmaids Tale and you will be nearly on the right track.

Men are no longer in charge, in fact there are barley any of them left, this is why they started the “End Men” 12 men who’s sole job is to save the world, their sole purpose is to repopulate the Regions.

The rich people can afford to buy Folsom for a day, however the poor are not so lucky, they must rely on a national lottery to have their numbers pulled out, and to have the opportunity of maybe becoming pregnant by one of the End Men, if you do, well your life will change for the better, you will become a celebrity, coveted by others.

Folsom actually hates being and End Man, although he gets to have meaningless sex with strangers all the time, it isn’t as fun as it sounds, he is unhappy, empty and lonely.

Gwen’s number finally comes up! She gets to have the chance at something she has always wanted, a child of her own, she has seen Folsom in the fancy magazines and on the TV, and now she finally gets the chance to actually meet him, not only to meet him, but to potentially bare his child.

Only she finds much more than a man looking to have mindless sex with her, she sees the person underneath, she sees the injustice of what is happening to him, and she does her best to save him.

By looking at the blurb of the book, and the picture, you probably will already have guessed that there is going to be sex in the book, this is necessary to the story, you can’t have a story about men having sex with people, to not have sex in the book.I loves me some smexy times in my books, but if lots-of-lovin’ isn’t really your thing, then maybe look in the other direction, but you will be missing out on a great read, I can’t wait to read book 2. 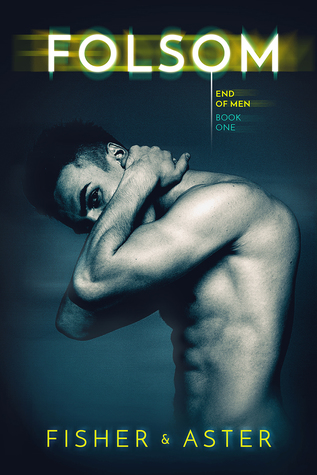 The nation as we know it is a thing of the past. With the male species on the verge of extinction, a society called the End Men is formed to save the world. Folsom Donahue is one of twelve men whose sole purpose is to repopulate the Regions. The endless days spent having sex with strangers leaves Folsom with an emptiness no amount of women, money, or status can fill.
Until Gwen.
Gwen has wanted a child for as long as she can remember, but when she finally gets a chance to have her own, she uncovers a long-hidden truth. The injustice she sees moves her to help save the men whom no one else believes need saving.
A forbidden love, grown in a time of despair, ignites a revolution. Folsom and Gwen, torn between their love for each other and their sense of duty, must make a choice. But some will stop at nothing to destroy them.

Folsom is book one of the End of Men series.