Hello from over here is a wet rainy UK!

I kind of knew what i was getting into with this one as I had watched the True Blood series on TV,  however I only watched about half of the first season, so I have no idea where it goes from there.

Why did I pick it up? – Well Urban Fantasy isn’t something that I would chose to pick up as a rule, but it was for a reading challenge, so I pulled up my big-girl panties and dove in, I’m so glad I did as I loved it!

Sookie Stackhouse is a waitress in a bar, she is very ordinary and has nothing special about her, well apart from the fact that she can read your mind and hear your thoughts!

She hates that she can do this, and tries her best not to, but it isn’t always that easy.

Now the town that she lives in is very open, in fact it is so open that they are OK with the fact that vampires live there, they keep themselves to themselves and there isn’t usually any trouble.

I loved the way that it is seemed as quite normal for Vampires to be living there, I mean they are not your normal neighbourly have-a-chat friendly type, but the world has grown used to these things now, Vampires can go into a local bar and have a beer, or a synthetically modified bottle of blood, and nobody really cares that much.

Bill is such a character, Sookie is drawn to him because unlike the others, she cannot hear his thoughts or read his mind, it is quiet for her for the first time, and she likes that.
They soon become friends and then more.

Her grandmother is horrified that she is seeing a vampire, until she meets Bill and is taken by is manors and how handsome he is.

With a mystery, and a few sub plots going on, I think that this is a series that I am going to really enjoy, there was lots of blood, violence and actually a nice love story.

🎧🎧 – Perfectly narrated by Johanna Parker, I just fell in love with her accent, the way she pronounces words was just beautiful, I’ve always been a sucker for a southern accent, and this made my heart swell with love for it even more 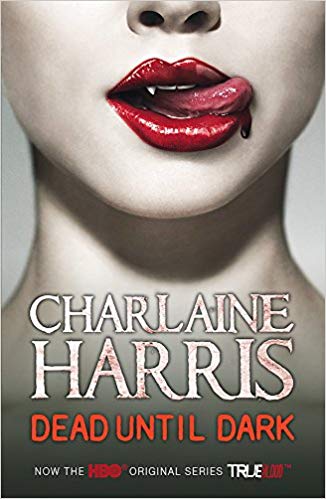 Sookie Stackhouse is a small-time cocktail waitress in small-town Louisiana. She’s quiet, keeps to herself, and doesn’t get out much – not because she’s not pretty – she’s a very cute bubbly blonde – or not interested in a social life. She really is…but Sookie’s got a bit of a disability. She can read minds.
And that doesn’t make her too dateable. And then along comes Bill: he’s tall, he’s dark and he’s handsome – and Sookie can’t ‘hear’ a word he’s thinking. He’s exactly the type of guy she’sbeen waiting all her life for. But Bill has a disability of his own: he’s fussy about his food, he doesn’t like suntans, and he’s never around during the day….Yep, Bill’s a vampire.
Worse than that, he hangs with a seriously creepy crowd, with a reputation for trouble – of the murderous kind. And then one of Sookie’s colleagues at the bar is killed, and it’s beginning to look like Sookie might be the next victim….