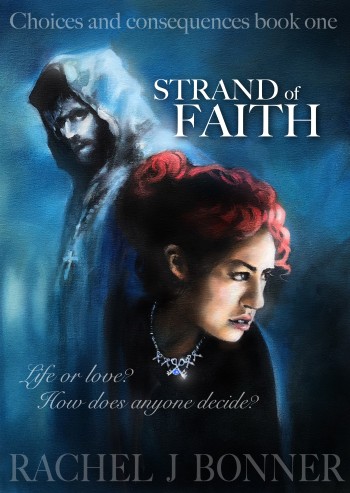 When the choice is between love and life, how can anyone decide?

A girl and a monk, both with extraordinary mental powers, have compelling reasons not to fall in love.  But those from whom they expect support are manipulating them both because their choices will have consequences for the rest of the world.

After a stormy youth, Brother Prospero has found comfort and fulfilment in the monastery.  That is, until he discovers something that forces him to reconsider his whole vocation. To follow his heart, he’ll have to face his demons again, outside the security of the monastery. Is it worth the risk?  Can he beat them this time? Or will they finally destroy him?

Orphaned and mistreated, Leonie has found sanctuary and safety at the abbey.  All she wants is to learn how to manage her unusual abilities so that she is not a danger to those around her.  When she comes into contact with Prospero everything threatens to spiral out of her control. Whether she leaves or whether she stays, how can she possibly avoid destroying – yet again – those she has come to care about?

Abbot Gabriel is faced with an impossible choice.  He can do nothing and watch the world descend into war.  Or he can manipulate events and ensure peace – at the cost of two lives that he is responsible for.  He knows what he has to do but is he strong enough to sacrifice those he loves?

1) When/how did you know you wanted to become a writer?

I’m not sure I ever did! This story developed in my thoughts over several years. In the end I had to write it down just to get my head space back – I have a hard enough time remembering what is going on in my own life, let alone the lives of all these characters. And once it was written down I was a writer, so I got on with polishing it and getting it ready for publication.

2) How do you come up with the names of your characters?

The main characters – Leonie, Prospero, Gabriel and Andrew all appeared in my head complete with names. I couldn’t call them anything else. As for minor characters, I’ll just sit and think through names until I find one that feels like it matches the character. I do a lot of genealogical research as one of my hobbies so I’ve usually got a fair range of names in mind. A number of the characters in Strand of Faith are named after some of my relatives!

3) What was the inspiration for your book?

I dreamt a small part of one of the scenes in Strand of Faith. I was so taken by the dream that I had to find out what happened both before and after, so I started questioning the characters in my head. The rest developed from that, bit by bit. It’s definitely influenced by things I enjoy.

4) Who/what are some of your favorite authors/genres to read?

How long have you got? Some of my favourites include Neil Gaiman, Terry Prachett (Discworld), Jodi Picoult, Annette Marie (urban fantasy), Jodi Taylor (Chronicles of St Mary’s), Sarah Woodbury (After Cilmeri time travel fiction), Trisha Ashley (romance), Diane Gabaldon (Outlander), Anne McCaffery (Dragonrider series). But there are many, many more.

5) What’s your favorite place to write? Do you need complete silence or do you like to be surrounded by sounds/music?

I write in my study (grand title for a not very big space) at home. It doesn’t matter to me what the noise level is like. I don’t tend to have music playing, but being interrupted or hearing other sounds around the house doesn’t bother me at all.

No, we’ve not really had a lifestyle that would be fair on most pets, although we did have tropical fish for a while. And I had a cat called Aberystwyth as a child.

7) If you could go anywhere in the world, where would it be?

I’ve visited a lot of Europe and quite a bit of North America because my family travelled a lot when I was a child. I’d like to go back to Canada because I don’t really remember it, but if I had to pick one place it would be New Zealand. I’ve heard so much about it and I’d really like to visit.

8) What were your favorite books as a child?

Winnie the Pooh by AA Milne. I still enjoy it as an adult and I’ve got several different editions from one that belonged to my Dad as a child to a new box set my son gave me last year. There’s a children’s book referred to in Strand of Faith. It isn’t named but in my head it’s Winnie the Pooh.

Egg on toast. My youngest brother and I agree that egg on toast is our go-to comfort food. I like my eggs fried, but he prefers scrambled.

10) What book character would you want to go out to dinner with?

Bertie Wooster from P G Wodehouse’s Jeeves books. He’s a bit of an idiot but he’d know all the best places to dine and follow it up with the theatre or a jazz club or dancing somewhere. And Jeeves would make sure nothing went wrong – or at least sort it all out in the end.

11) Do you ever write characters based on someone you know? Do you ask them first? Has anyone guessed it?

No character is totally based on someone I know. Every character has a bit of me in. But I can see individual characteristics of some of my friends reflected in some of my characters – one of my characters might have traits from several of my friends. I don’t ask them first because I don’t know it’s going to happen until the character is well established. So far very few people have guessed – or at least they haven’t told me if they have. My family can see me and my husband in the two main characters, but they aren’t a total reflection of us.

Leave it and write a different scene or change POV. I usually get stuck because what I’m working on isn’t what is currently dominating my thoughts – so I have to clear the scene that is dominating my head space by writing it and then I can get back to the original scene.

Rachel J Bonner is the author of the four book Choices and Consequences series, the first of which, Strand of Faith, is due out in November 2018.

Getting a degree in engineering, followed by a career in accountancy is probably not a conventional path to becoming an author, particularly in paranormal romance.  Rachel says that, although accountancy isn’t anything like as boring as everyone thinks, writing is a lot more fun. When not writing, she can be found walking in the beautiful countryside near where she lives, which has influenced much of the scenery in her books, or shooting things with her local archery club.  Target shooting only, honest. Nothing to worry about.

You can find out more about her books and sign up for Rachel’s newsletters at www.racheljbonner.co.uk. 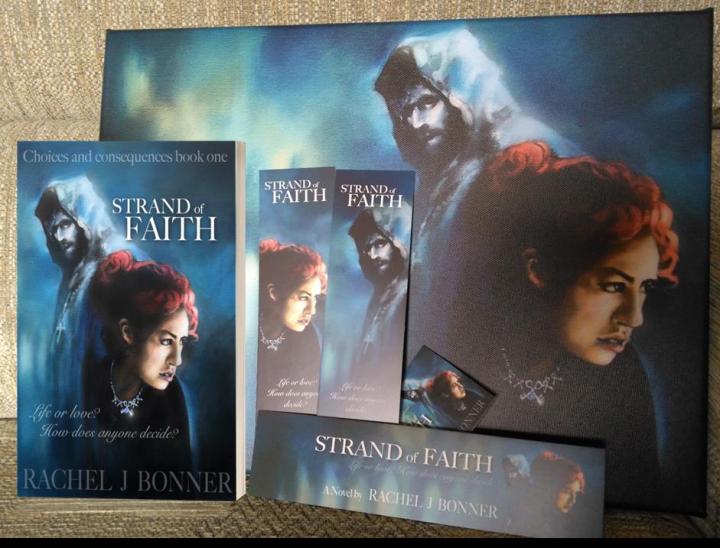 Giveaway -Win a signed paperback copy of Strand of Faith, a set of bookmarks (3 styles plus a business card) featuring the cover art, and a canvas print (40cm by 30cm) of the original cover art. Open Internationally

*Terms and Conditions –Worldwide entries welcome.  Please enter using the Rafflecopter box below.  The winner will be selected at random via Rafflecopter from all valid entries and will be notified by Twitter and/or email. If no response is received within 7 days then I reserve the right to select an alternative winner. Open to all entrants aged 18 or over.  Any personal data given as part of the competition entry is used for this purpose only and will not be shared with third parties, with the exception of the winners’ information. This will passed to the giveaway organiser and used only for fulfilment of the prize, after which time I will delete the data.  I am not responsible for despatch or delivery of the prize. 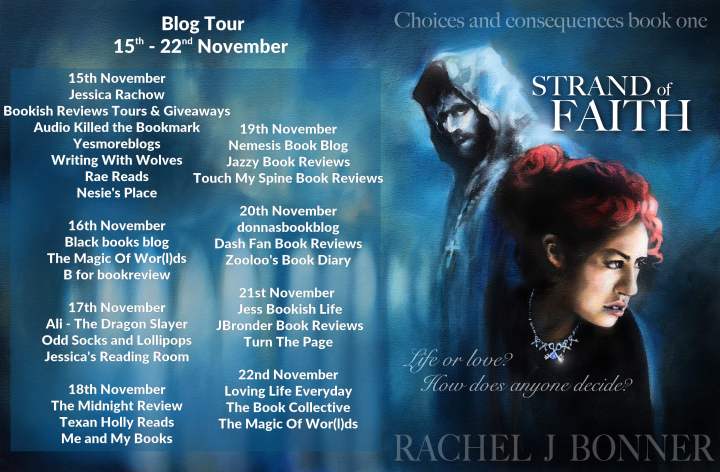 I am so thankful for all of you and your continued support of our blog! I am also extremely thankful for my three amazing children, my adorable pets, my wonderful parents, and my Beautiful friends!

Also thank you to Emma for my invitation to this tour!💕🦃💕🦃💕 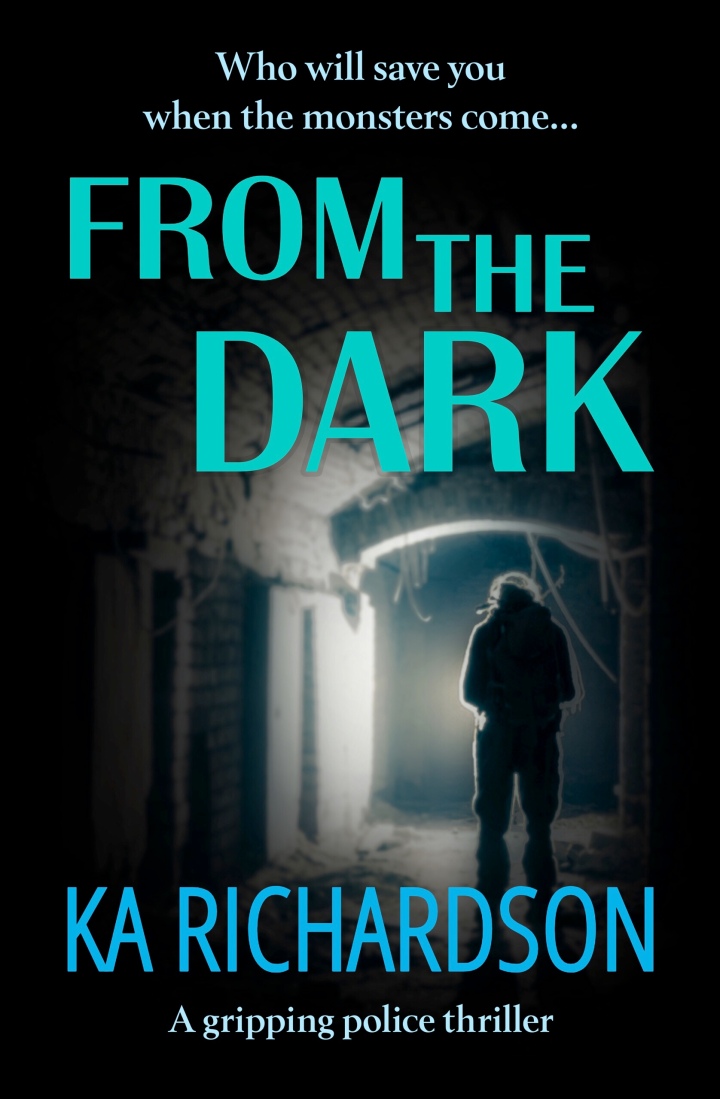 Who will save you when the monsters creep in?

This is a dark disturbingly compelling story… definitely not for the faint of heart, parts of this book are violent but not gratuitous…. this is the fifth book in the series, but it can absolutely be red as a standalone… I have not read any of the prior books and I had no trouble following along…

Do you believe in psychics? Well detective Mark McKay doesn’t… that is until he becomes involved with Toni, a gypsy, a psychic, a blast from the past… Toni has a vision of a young man being murdered, and reports it to the police… that is when she is hooked up with Mark the skeptic and old crush…. but it is tough to be skeptical when Toni’s visions seem to be true… thre mystery full of plenty of suspects and a sinister air….

Not sure if I believe in psychics or not, but I definitely do a little bit more after reading this book… Toni was a fabulous character and I really love how Mark and she played off each other… also loved the romance I thought it was very well done an added another layer to this story… I always appreciate a book of this nature more when I get a better insight into the characters and I definitely did with this book…

Absolutely recommend… a book Full of rich characters and a strong plot! Life can be ugly and brutal, this book does show you the darker side of life just keep that in mind before picking it up!

When the ghosts of the past come calling, can she put her own fears aside and work with the police to help find who is torturing and killing young men?

Detective Sergeant Mark McKay has never had a need to solve a case using a psychic. He doesn’t believe in it – pure and simple.

But when Antonia tells him the name of a young man and gives him details specific to the case, he can’t help but change his view when a body matching what she says, is found in the vaults deep under the city.

Mark and Antonia race against a spree of monstrous crimes, long-standing grudges and the perils of the darkness in the vaults under Edinburgh to try and find a sadistic killer before time runs out.

Can they stop him before he strikes again?

Will they discover who is responsible?

And can they do it without becoming victims themselves? 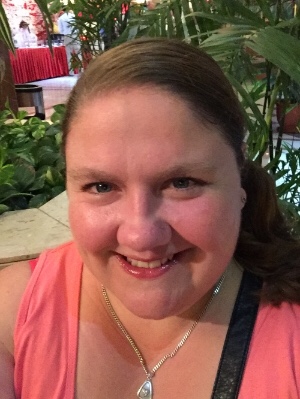 About K.A. Richardson:
KA Richardson is a crime writer based in North East England. She has worked for the police for around 8 years, both as a CSI (crime scene investigator) and also in alternate roles involving dealing with people in heightened states of emotion. She spends a lot of time in coffee shshops, both writing and people watching. She began focussing on writing as a career in 2011 when she competed her MA Creative Writing, and focuses primarily on the crime/police procedural genre. 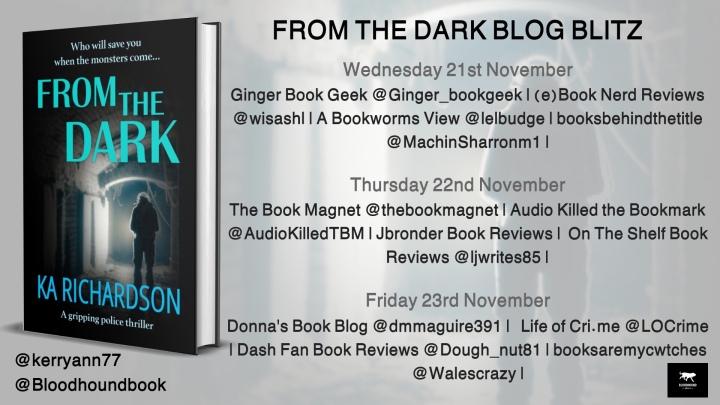 Have a beautiful day full of books and turkey! Berit☀️✨