Thrilled to be on the tour for this thriller by one of my favorite authors! A huge thank you to Kim for my invitation and to Kim Slater for this fab book, although I’m still a little angry about that ending! Just saying!😉💕 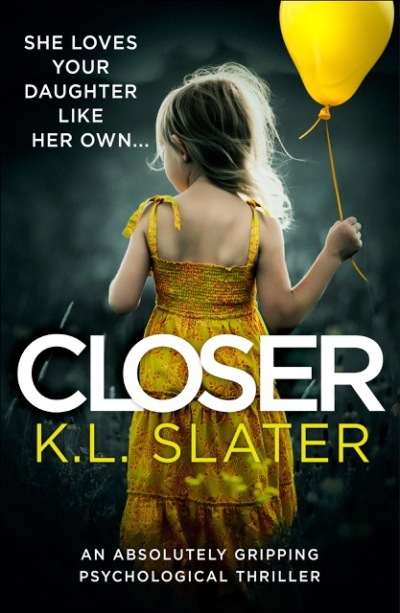 I know my daughter better than I know myself and if there’s one thing I know for sure at this moment: it’s that Maisie is not ok.

My ex-husband Shaun and I are still friends.
We would do anything for our beautiful little girl, Maisie.
But now Shaun has moved in with Joanne and suddenly, Maisie has a brand new family.
And there’s something not quite right about it…I know Joanne isn’t everything she says she is. Yet no-one will listen.
I need to discover what she’s hiding.
Because if I don’t, my daughter will be in terrible danger.

The most gripping psychological thriller you’ll read this year from the Kindle top five bestselling author K.L. Slater. If you love The Girl on the Train or Gone Girl, you’ll be absolutely hooked.

This was a riveting and addictive read, that left my head spinning and my heart pounding…..

K.L. Slater that ending! That was pure torture! or pure genius!?!? Seriously! I’m still looking for the missing pages from my book, the ones that tie it all up neatly! Surely you cannot be that cruel? My mind is still reeling and my imagination is going crazy! Nicely played Miss Slater!

This book is a slow burn that ends in a blaze of glory…. Emma and Shaun are separated, but still living in the same house for the benefit of their daughter Maisie… that is until Shaun starts dating Joanne, who just so happens to be Emma‘s boss…. and if that wasn’t bad enough she’s also the mother of Piper a spoiled rotten brat who dances at the same studio as Maisie, and is definitely not Maisie’s favorite person…. at first Emma tries to put on a happy face for the benefit of her daughter… but, as she begins to see her daughter’s personality morph into a person she does not recognize she becomes very concerned… convinced that her daughter’s changed personality has something to do with Joanne and her brat daughter… Emma begins to look into Joanne’s mysterious passed….

A crazy, uncomfortable, mind blowing, and Page turning story full of unlikable characters… The only characters I liked in this book were Emma and Maisie…. Emma really did all she could to make this situation as tolerable as possible and my heart broke for her as she watched her daughter deteriorate… Maisie was such a sweet child I just wanted to reach through those pages and give her a big hug, what was done to her was unforgivable…. The rest of the characters were just plain despicable… with Shaun winning the prize for being the most despicable…. he was so blinded by love or lust or something that he couldn’t see what was going on with his daughter, instead he chose to believe that Emma was making things up… I really wanted to reach into the pages and shake him into reality, not sure what was up with him! Joanne and her daughter were just straight up obnoxious from the very first page….

This is one of those stories wear your pretty certain of who is the good guy and who is the bad guy, but not so fast…. as in all good psychological thrillers this book takes everything you think you know and turns it on its head…. A powerful story about a mother’s intuition and her determination to find out the truth… A thriller that slowly draws you in and then won’t let you go until the, very. final. word.

Absolutely recommend to all fans of the psychological thriller genre, this is one not to miss!

Kim is the bestselling author of psychological crime thrillers ‘Safe With Me,’ ‘Blink,’ ‘Liar,’ ‘The Mistake’ and ‘The Visitor.’ Her latest thriller, ‘The Secret’ was published by Bookouture on 27th July 2018 and her new thriller CLOSER will be published 24th October 2018 and is now available for pre-order.

Kim’s titles are soon to be published in paperback by Sphere in the UK and Grand Central in the USA.

For many years, Kim sent her work out to literary agents and collected an impressive stack of rejection slips. At the age of 40 she went back to Nottingham Trent University and now has an MA in Creative Writing.

Before graduating in 2012, she received five offers of representation from London literary agents and a book deal which was, as Kim says, ‘a fairytale … at the end of a very long road!’

Kim is a full-time writer, has one grown-up daughter, Francesca, and lives in Nottingham with her husband, Mac.

Have a lovely day! Berit☀️✨

“I am a cat. But I am no ordinary cat. I am a witch’s familiar. I am also a woman, with a woman’s heart and a woman’s frailty.”

Nearly two hundred years have passed since Caitlyn was trapped by supernatural forces and black magic, and she has known many mistresses. This time, the witch she is enthralled to is Joan, wife of Llewelyn, Prince of Wales.

At first, this mistress appears no different to any of the others Caitlyn has served – until Llewelyn captures William de Braose, and Joan falls in love, risking everything, including Caitlyn, to fulfil her desire.

Caitlyn, meanwhile, has her own cross to bear in the form of the gallant and reckless Hugh of Pembroke…

Elizabeth Davies is a paranormal author, whose books have a romantic flavour with more than a hint of suspense. And death. There’s usually death…