Happy Tuesday that seems like a Monday! Those long weekends always throw me off!

Thrilled to share with you my review for this suspense filled book with a bit of a controversial ending, that I personally loved!💕

When the Lights Go Out by Mary Kubica

WOW! Whether intentional or not this book definitely has an ending that has caused some controversy… for me the ending was absolute PERFECTION! It made every piece of the puzzle in this book fall into place and make complete sense….I’ve read other reviews and people described their reaction to the twist as a gasp, or frustration, or pure hatred… not me… my reaction was…. AHA! now I understand….. now I get what ____ was,And why ____ happened! This is not to say I don’t understand why this ending did not appeal to everybody, because I do… but I think everyone needs to read the book and figure out if it works for them or not….

This was my very first Mary Kubica Book… and I’m not sure why, but I can guarantee I will remedy that real quick…. her writing was so beautiful and smooth, almost lyrical…. even though this was a slow burning suspense I found the pacing perfect… The characters were so well drawn and relatable… I empathized with Eden’s struggles and felt Jessie’s grief…. all the little hints sprinkled throughout this book that made that ending so perfect for me, were just brilliant….

Told from Jesse’s point of view in the present and Eden’s point of view in 1996…. Jesse is a young 20-year-old grieving the loss of her mother and trying to figure out who she really is… literally trying to figure out who she is, after finding out that her Social Security number belongs to a dead girl… eden is a young wife struggling with infertility…. my mind ran through so many scenarios as to who Jesse really was and what Eden had done…. both mother and daughter had tremendous love and respect for one another… you just wanted there to be a good answer for all of your questions….

Absolutely recommend to those who enjoy a good suspense thriller filled with some surprising twists….

*** many thanks to Harlequin for my copy of this book ***

A woman is forced to question her own identity in this riveting and emotionally charged thriller by the blockbuster bestselling author of The Good Girl, Mary Kubica

Jessie Sloane is on the path to rebuilding her life after years of caring for her ailing mother. She rents a new apartment and applies for college. But when the college informs her that her social security number has raised a red flag, Jessie discovers a shocking detail that causes her to doubt everything she’s ever known.

Finding herself suddenly at the center of a bizarre mystery, Jessie tumbles down a rabbit hole, which is only exacerbated by grief and a relentless lack of sleep. As days pass and the insomnia worsens, it plays with Jessie’s mind. Her judgment is blurred, her thoughts are hampered by fatigue. Jessie begins to see things until she can no longer tell the difference between what’s real and what she’s only imagined.

Meanwhile, twenty years earlier and two hundred and fifty miles away, another woman’s split-second decision may hold the key to Jessie’s secret past. Has Jessie’s whole life been a lie or have her delusions gotten the best of her?

Have you read this? What did you think of that ending??? Berit☀️✨ 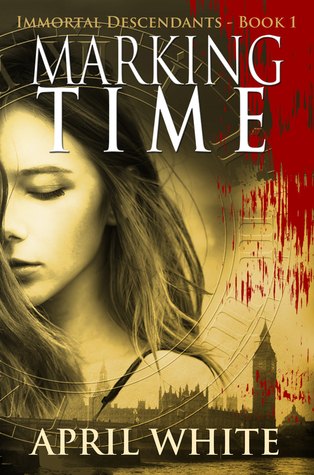 Seventeen-year-old tagger Saira Elian can handle anything… a mother who mysteriously disappears, a stranger who stalks her around London, and even the noble English Grandmother who kicked Saira and her mother out of the family. But when an old graffiti tag in a tube station transports Saira to the 19th Century and she comes face-to-face with Jack the Ripper, she realizes she needs help after all.

Saira meets Archer, a charming student who helps her blend in as much as a tall, modern American teen can in Victorian England. He reveals the existence of the Immortals: Time, Nature, Fate, War and Death, and explains to Saira that it is possible to move between
centuries – if you are a Descendant of Time.

Saira finds unexpected friendships at a boarding school for Immortal Descendants and a complicated love with a young man from the past. But time is running out for her mother, and Saira must embrace her new identity as she hides from Archer a devastating secret about his future that may cost him his life.

Phew! This was a relief, i read this book a few years ago and was worried about revisiting it, but Huzzah! I still loved this book.

This little cracker of a book can be found free on Kindle, and thats exactly how i found it last time, this time i listened to it.

Saira is a young girl that hasn’t really had the best upbringing, moved around from pillar to post her mother disappears, nothing new, she does that for days or even weeks at a time, and Saira can look after herself.

As a freerunner Saira loves the freedom of the city, and often leaves her “tag” in places she has stopped at, unfortunately this time she gets caught by the cops, and with her mother not there, she gets shipped off to stay with her Grandmother in London, who isn’t best pleased to see her, considering she threw Saira’s mother out.

Meeting new people and travelling around London is a new experience for Saira, and being chased by a strange man calling her “Clocker” has her hiding in a tube station.
She notices an old “tag” there and puts her fingers on it to trace and admire it…….big mistake!

Turns out that Saira is a Clocker, someone who can travel through time, and she finds herself in 1888 and being chased by no other than Jack the Ripper, and she’s sure she also spotted her mother at some point!

Finding her way back to present day she learns the family history, and also that things like Werewolves, Shifters and Seers exist!

Oh and she also meets Archer, who is a vampire!

For someone who is not a Paranormal fan i was truly engaged in this story, even though it had vampires and wolves in it, it didn’t focus on the “magicky” part of it, if that makes sense.

🎧🎧 Narrated by Gemma Barrett who is a new to me narrator.

Fantastic narration and such a good story, give it a try, it’s free on Kindle, what have you got to lose?