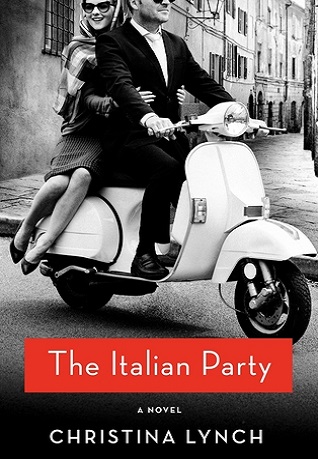 The Italian Party by Christina Lynch

A delicious and sharply funny page-turner about “innocent” Americans abroad in 1950s Siena, Italy. Newly married, Scottie and Michael are seduced by Tuscany’s famous beauty. But the secrets they are keeping from each other force them beneath the splendid surface to a more complex view of ltaly, America and each other.

When Scottie’s Italian teacher–a teenager with secrets of his own–disappears, her search for him leads her to discover other, darker truths about herself, her husband and her country. Michael’s dedication to saving the world from communism crumbles as he begins to see that he is a pawn in a much different game. Driven apart by lies, Michael and Scottie must find their way through a maze of history, memory, hate and love to a new kind of complicated truth.

Half glamorous fun, half an examination of America’s role in the world, and filled with sun-dappled pasta lunches, prosecco, charming spies and horse racing, The Italian Party is a smart pleasure.

Grande Successo! this book was an unexpected Gem for me….Siena,Italy 1956….Two Young newly married Americans…. full of secrets and hope….

Scottie and Michael are newly married…. both of them came to the marriage with many secrets and for different reasons…. Michael works for Ford selling tractors to the Italian farmers…. but he has a hidden agenda… he wants to bring the American Capitalistic ways to Italy and fight communism…..scottie is a girl that got herself in trouble and the only way she sees out is by marrying somebody and becoming the perfect wife…. so what happens when two people that hardly know each other move to a country where they don’t know anybody?

Michael and Scottie were very well-developed characters… I felt for both of them… they both really wanted to do the right thing but they both got themselves into some pretty tough situations….. situations that would not be a big deal today but this is 1956…. I really loved that this book was set during this timeperiod As well…. there are very few books that I have read set in the late 50s, and this is probably the only book I’ve read set in Italy during that time….. for me Italy itself is a character in any book I read that takes place there, it seems like such a colorful culture…. and all that delicious food!

This wasn’t a book filled with twists and turns, but it sure kept me turning the pages…. I was so invested in how Michael and Scottie were going to work this out…. how and when were secrets going to be revealed? How were people going to react? I also was fascinated with the Italian political culture at the time…. I am not a huge historical fiction person, but this was an absolutely compelling read….

Strongly recommend to fans of historical fiction or anybody who loves a good story….